I've kept track of the neighborhood around the shuttered Alexander Macomb Elementary School on Detroit's east side for a few years now, since I surveyed the area using Google Street View Time Machine imagery in this Loveland blog post. One block in particular has kept my attention:

11200 block of Maiden Street, between Conner and Gunston

In 2014, after surveying the block with a combination of Google Street View Time Machine imagery and in-person surveys using Loveland's Site Control, I created a chart that showed the number of occupied vs. vacant homes vs. tax foreclosures on Maiden's 11200 block between 2008 and 2014. It was, I thought, a useful demonstration of the fact that where there is tax foreclosure, there will be vacant homes and, thus, declining population, declining tax revenue, and increasing blight.

Last week, on August 11th, 2016, I went back out to the 11200 block to resurvey the street and see how things had changed since my last visit, and to add another frame to the chart tracking vacancy and foreclosure.

I resurveyed the 34 properties on the block and found that the trajectory the street has followed since the financial crisis continues today. The chart below shows the number of occupied homes, vacant homes, and cumulative tax foreclosures on Maiden's 11200 block between August 2008 and August 2016:

While there's not much left to go vacant, another property or two has emptied. Two of the properties that may still be occupied look squatted in -- one appeared to have drug activity outside it, and another was in rough shape and missing utility meters outside. Severe fires have caused the collapse of 2 additional structures since 2014, and significant damage to 5 others, like 11313 Maiden, seen here.

The most notable change since 2014 is not the slight increase in vacancy or foreclosure, but the deterioration of property conditions on the block. The bar chart below compares the conditions of the 21 structures on Maiden Street as of January 2014, when the block was surveyed as part of Motor City Mapping, and when I resurveyed the street in August 2016:

As tax delinquency and foreclosure begets blight and vacancy, there is little evidence of a change of fortunes ahead for the 11200 block of Maiden Street: Of the 34 properties on the block, 22 are owned (via foreclosure) by the city or land bank, and 12 are still privately held. Of those 12 privately held, 8 are behind on their property taxes, and headed for foreclosure over the next couple years.

Put another way, of the 34 parcels on the 11200 block of Maiden Street, only 4 appear to be generating any property tax revenue.

If you'd like to explore the latest survey data, photography, and property conditions on Maiden Street, you can do so in the Site Control map below:

Teaming Up to Fight Foreclosure

Teaming Up to Fight Foreclosure

If you've been a follower of ours for a while, you know that fighting tax foreclosure is a cause that is near and dear to our hearts here at Loveland. Over the last several years, we've worked hard to bring attention to the systemic issues related to tax assessment and the foreclosures that result, decimating the housing stock and draining Detroit and Wayne County from thousands of residents year after year.

Because of this, we're incredibly honored and proud to have worked closely with various local, city, and county organizations on the following two projects:

Read on for some firsthand experience of these projects, written by Lovelander and Project Manager Jackie Grant:

"Recently, I worked on an incredible project to bring some understanding and support to our friends and neighbors in Wayne County who are experiencing property tax issues. The Loveland Technologies team worked alongside Wayne County Treasurer Eric Sabree and his team, as well as with the United Community Housing Coalition, to mount this large-scale effort and reach out to more than 9,000 potentially occupied homes at risk of foreclosure in 2016. With these partners and colleagues, we were able to use Loveland's software and mobile application to direct neighbors through a series of questions, questions that would direct a conversation and provide some hope and much-needed information to folks in need of tax assistance. 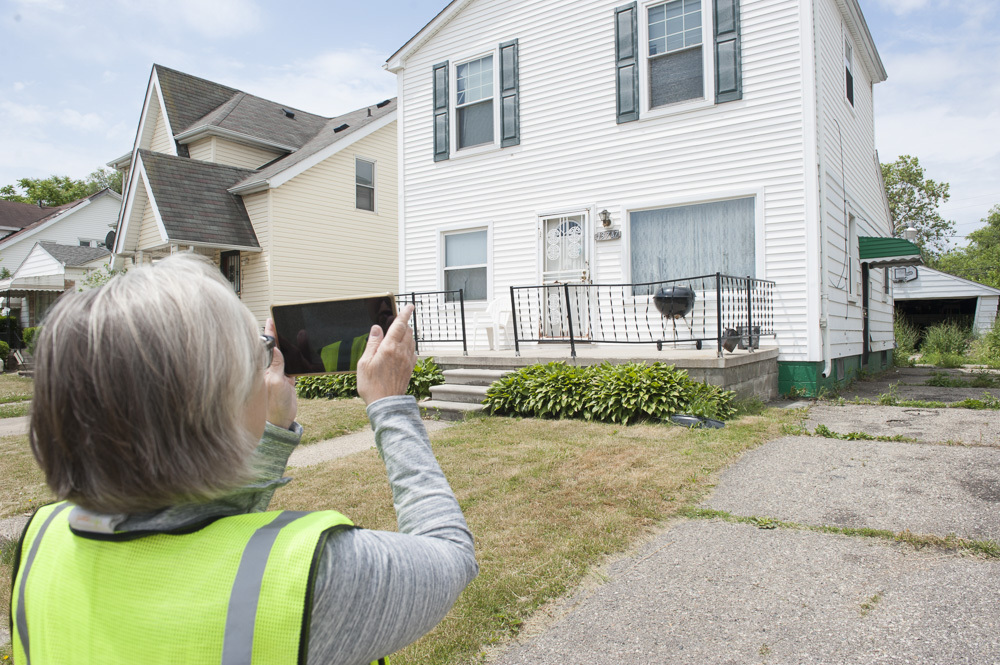 "After weeks of dedication and planning, we headed out -- tablets in hand! -- into many Wayne County neighborhoods. With the help of dozens of trained canvassers to reach out one-on-one to our neighbors and fellow Wayne County residents, were able to gather information and provide the support that some of these people didn't know they needed.

"Upon making contact with a homeowner, renter or responsible adult living in the property, we asked a simple set of questions; we talked to them about the property's ownership status, it's risk of being foreclosed upon, whether or not they wanted to stay in the home, and other pertinent questions. I, personally, met many good hardworking people that had experienced job loss, catastrophic health events, death in the family, and more. In all, people were receptive, surprised, and grateful that someone cared enough to come to them -- to their home -- and give them hope and direction with the right steps to save their home from foreclosure. We did it in less than 3 weeks! 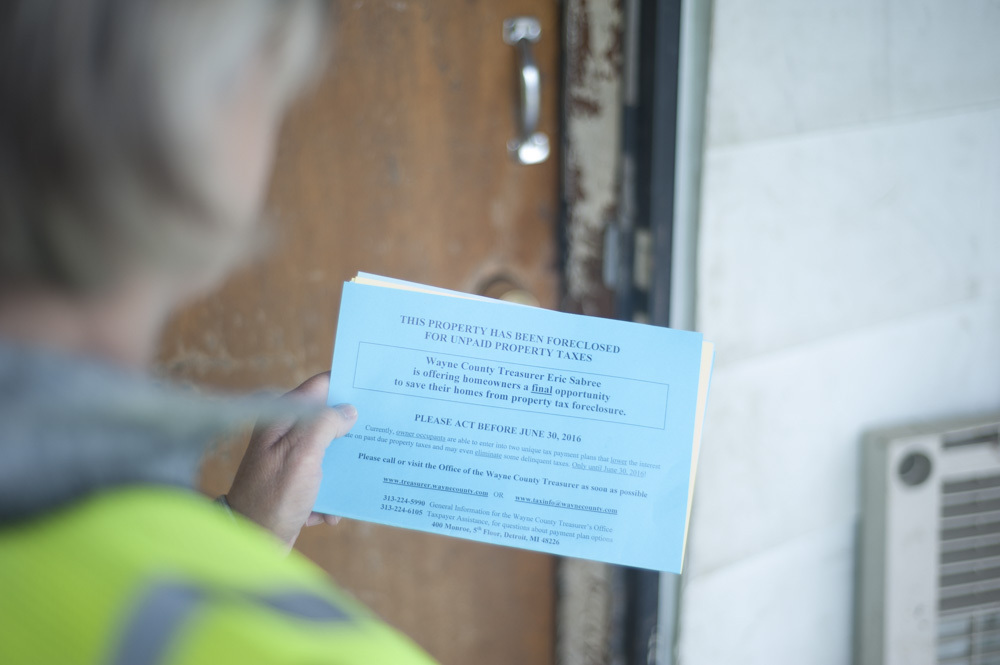 You can see the results of this survey at www.taxforeclosuresurvey.com .

"What is Wayne.tax? It is a new Wayne County website that Loveland Technologies created to facilitate property tax inquiries. Upon entering the site, a property owner or interested party will be prompted to perform a quick search of any property in Wayne County. Search results show the property ownership and current tax status. If the property is not up-to-date on its taxes, users will be prompted to click through a simple Q&A that speaks to users in friendly and easy-to-understand terminology.

"From here, property owners or interested parties are presented with recommended actions to take to save the home from foreclosure. Included in these suggestions is more information regarding payment plans, free counseling, and other resources.

Explore more at wayne.tax and share with your friends and neighbors!"

Thanks to Jackie for sharing her experience! The Loveland Team would also like to thank Wayne County Treasurer Eric Sabree and his team, United Community Housing Coalition, the City of Detroit Tax Foreclosure Task Force, Kresge Foundation, and our other partners for helping make these projects possible.

Are you a real estate appraiser who needs to collect parcel-level data on properties and neighborhoods quickly? A city on a tight budget, trying to evaluate housing stock? A researcher collecting data on properties to inform your studies and analysis? If so, we've got a pretty awesome tool for you...

Watch the video below to see how you can use LOVELAND's Site Control to create custom property surveys, evaluate properties via Google Street View, and attach data to the assessment records of any of the more than 115 million parcels LOVELAND has online across the United States.

With Site Control and the Street View Surveyor, you can collect parcel level data on thousands of properties in record time.

But, it's not just Street View imagery at your property surveying fingertips: We can consume imagery via API from other third party street level and oblique / orthogonal imagery providers. If you're working with third-party providers of high resolution imagery, LOVELAND can feed your provider's imagery into Site Control, allowing you to code high resolution imagery in record time.

The LOVELAND Surveyor Interface in Action

When to Use Street View vs. In-Person Surveying

If you’re thinking, “But Street View is often years old. How can I trust its imagery when I know things change? I don't think it can replace a person who's familiar with the city out surveying in person.”

Trust us, we hear you. Nothing can replace a human in the street evaluating a property, talking to neighbors, and taking up-to-the-moment photography, but that can be an expensive proposition. Surveying via Street View can help you evaluate many properties quickly, and identify the ones that you think need in-person follow up.

When you decide it's time for a surveyor on the ground, they can hit the field with the LOVELAND App and survey using the exact same questions used in your Street View evaluation. This can augment your Street View surveying, giving you an up-to-the-moment understanding of conditions, and collecting insight from neighbors or occupants to gather deeper information on the property.

We want to help you focus your survey personnel on the properties and areas where you know conditions are more dynamic, and the human eye is far mightier than Street View’s.

Street View’s drive-thru regularity varies widely, typically based on a city’s size. However, there are many places where LOVELAND has parcel coverage, and Street View drives regularly.

Some major cities with Street View imagery less than a year old:

If you're curious when Street View imagery was last collected in your city or town, just go to Street View in your area and look in the lower right hand corner of the screen, as you see below:

In the map below, you can explore the results of a very simple one-question property survey conducted over 250 or so parcels on Chicago's South Side.

The job was to answer one question: Is the property vacant? Street View imagery in Chicago is very recent -- circa November 2015 -- so a quick scan of the area can reveal where vacancies are likely, and further follow ups with those properties can happen through in-person surveys of just those parcels, limiting the amount of on-the-ground time and expense.

Finally, a word for Google, if you’re out there, thank you for Street View. Its value is tremendous and we believe only beginning to be realized. We hope that we’re playing some small part in demonstrating what it can do. And I couldn’t end this without asking -- Please, pretty please, may we have API access to Street View Time Machine imagery?

Thank you from Team LOVELAND.

We've been hearing from friends and fans alike that having access to a Loveland API would be really helpful. Since there's no better place to get suggestions and feedback, we're going straight to the source.

If you or someone you know is interested in a potential Loveland API:

FILL OUT OUR SURVEY!

We want to hear how you’d like to use a Loveland API to power your projects and ideas with parcel data and shapes. If you have ideas, let us know. And if you've got any general questions, you can reach us at any time at team@makeloveland.com.